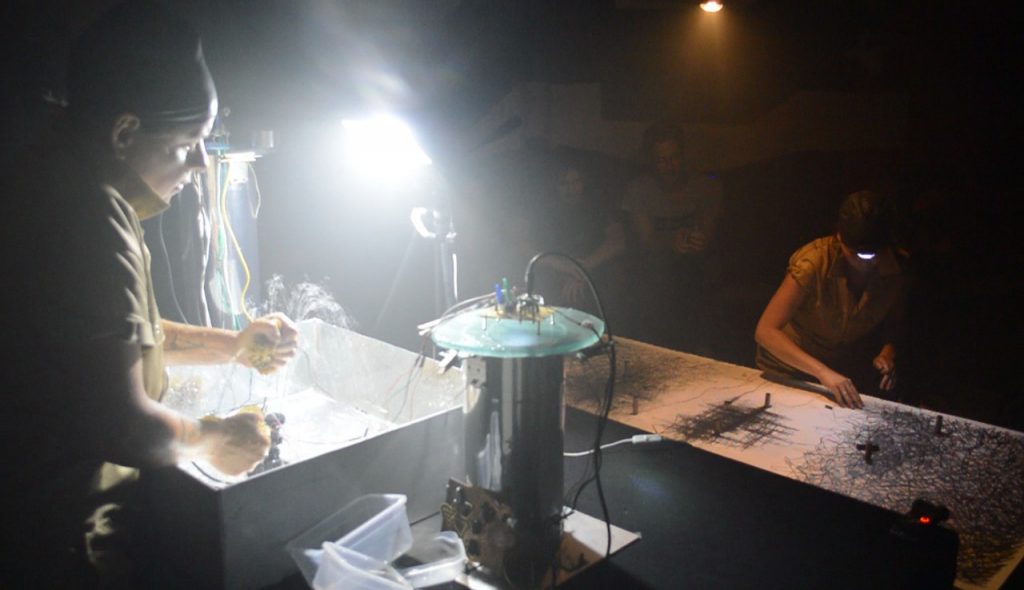 Gaia-resonance is an installative sound performance in which physical and natural materials are used to generate and manipulate electronic sounds. It’s a collaboration between Margriet Kicks-ass and Dewi de Vree.

Inspired by natural phenomena and the interaction between man and the machine, the artists are developing sound machines, instruments and sound-interfaces, in which electricity is handled as a raw material to make electronic sound. Central in their work, is experiencing the fine balance between the unpredictability of the material and the control of the performer.

The instruments are often low-tech, with open constructions and manipulated mostly in a very direct way. Sound and image are strongly connected: what you see is what you hear. Using everyday materials like water, graphite and paper, the artists aim to demystify the technology in electronic music. Pouring or touching water, drawing on paper, moving magnets and scanning a stone with a needle, are examples of actions taking place in the performance. By bringing back physicality and tangibility in electronic music the artists want to show the forgotten primal force behind electricity or electronic sound.

The performances of Gaia-resonance take place in an installative setting. For a moment the audience is immersed in an imaginary world which can be best described as an eclectic hybrid between a laboratorium and a cave deep under water or in the centre of the earth. As otherworldly creatures the performers take everyday objects and materials out of their context and thus give them a new meaning.

The sounds that are heard during the performance embody nature in all its diverse behaviour in micro- and macro cosmos and can vary from quietly or uncanny low-frequency and deep rumbling drones, to explosions of screaming and violently hissing ultra-high frequencies as sudden releases of energy.