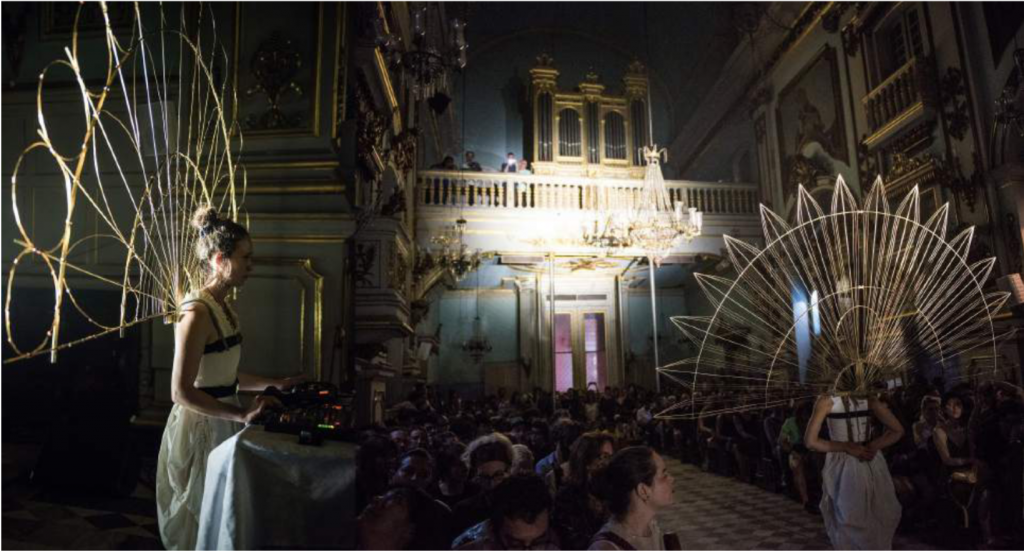 “Magnetoception: a sense which allows an organism to detect a magnetic field to perceive direction, altitude or location.”

Magnetoceptia is a series of performances and installations in which self-constructed, antenna-based costumes pick up radio waves site-specifically and make them audible through electronic sound.

The project is an investigation on different sonic and material properties of natural environments contrasting urban landscapes and a visualisation of physical phenomena that primarily appear to be invisible for the human gaze. Extensions of our rudimentary animal senses are developed to make those phenomena perceivable.

The experienced sound is site-specific and generated during the performance, a sonic exploration of the specific spatial situation.
The sound is modulated by the positions and movements of the performers relative to the space and each other, dismantling traditional concepts of stage and catwalk, musician and instrument.

Magnetoceptia is operating a process of continuous adaptation to the venues and platforms where it manifests itself for a singular occurence
after which it falls apart again in separate pieces. Those seem to be endlessly recombinable and can merge into various different shapes,
to another immersive multi-sensorial experience of its own kind.